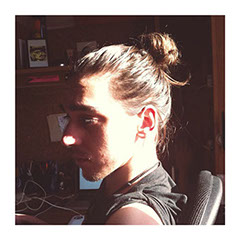 Joel Amat Güell (born Joel Amat Güell) is not an academy award winning writer, instead he just draws things for a a living. He has designed t-shirts and a huge range of apparel for a lot of clothing companies you've probably never heard of and for some others that you probably have.

He has also illustrated comics, colored comics and even read some comics. He has done other stuff too, which you can see in this website.